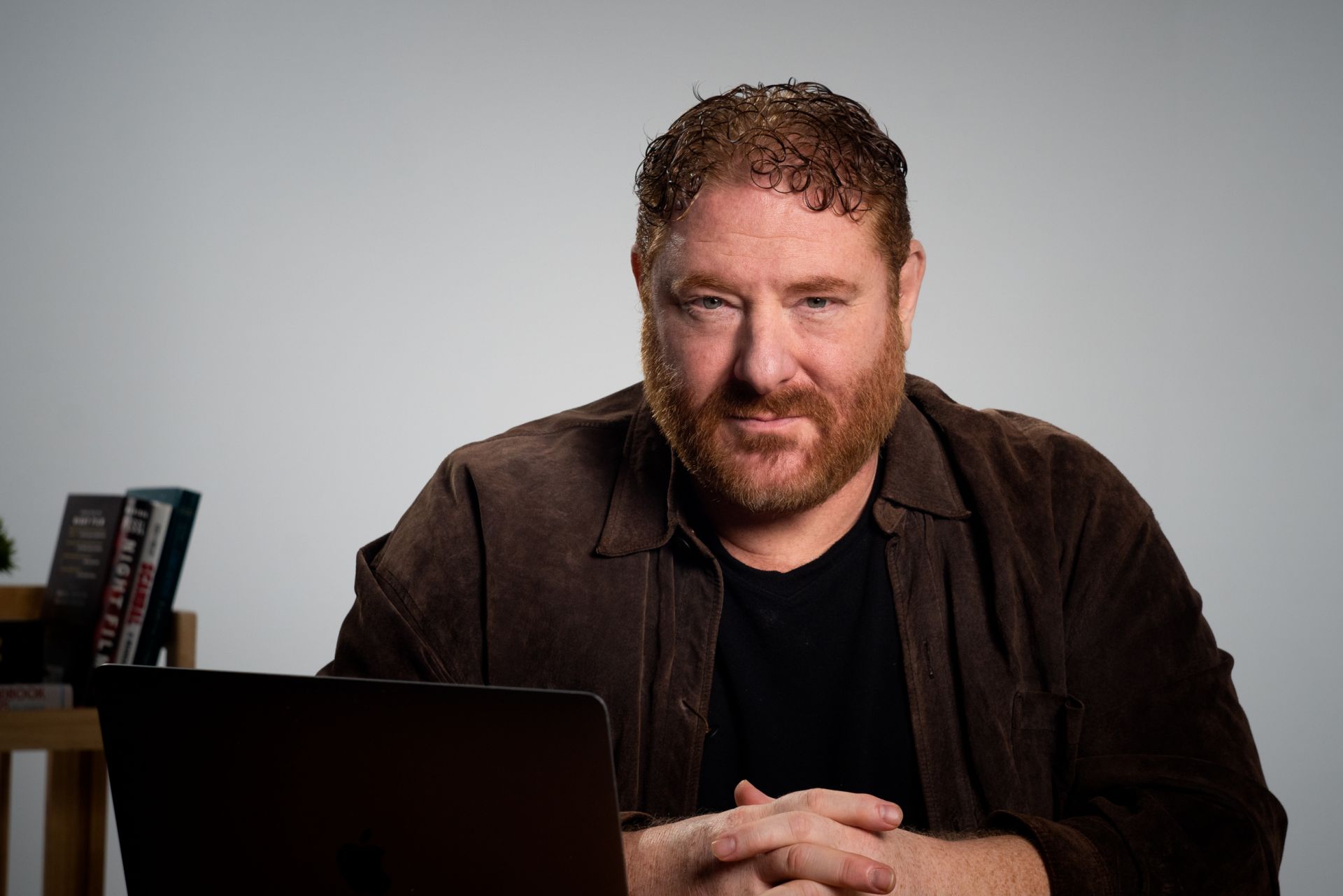 Today, we have the pleasure of speaking with Michael Tabb, who is a screenwriter, decade-long current and active member of the Writers Guild of America, a multiple-award-winning screenwriting educator, and author of the book Prewriting Your Screenplay: A Step-By-Step Guide To Generating Stories.  He also serves as a Program & Curriculum Advisor at ECA.

Michael, it’s great to have you here with us today. To start off, tell us about your background and how you got into screenwriting.

If you look at your website, which is www.michaeltabbwga.com, you've got accolades from lots of big names in Hollywood, not just for the writing work that you've done, but also for your book that you've written called Prewriting Your Screenplay. Like you said, this is not an easy business to make it, much less be successful, and for our young aspiring writers and storytellers, tell us how you got to where you are now.

There are two keys to being a writer: constantly writing and constantly reading. As you're going through the cycle of reading and writing, when you're reading you're saying, “Oh that works, oh that didn't work,” and your brain is picking up new ways to make things work and realizing how and why things aren't working on the page. So reading is one of the things, and the other thing is obviously you’ve got to write and you've got to write a lot because this business is going to give you 50 no's for every one yes minimum, so when somebody says no, if you don't have the knowledge and the wisdom to keep going and keep pushing and keep writing, then you're not going to survive. You're going to give up and go do something easier. The celebrities in the business, you see them as these rich people and you want to be like that someday. That is such a narrow contingent of the industry, it is unbelievable. All you're seeing is the top point, 0.1% of people who work in this industry. And the rest, we work from paycheck to paycheck to paycheck, and if we work in the creative side of things we have to make our paychecks for different projects last because we're basically independent contractors, so you have to make the money last in between gigs. If you make $100,000 on a gig, you don't know how long that money is going to last until the next time you're going to get hired on a gig. You can't just go out and have a great time and spend it; you gotta put that away, you gotta plan for your future, create a retirement account, all that stuff and live wisely so you can continue to do the business. Because if you run out of money, then you have to go get a job outside the business to pay for your entertainment habit business. And you won't have the time to put into the business that you did and slowly your returns are going to diminish because you're not able to put in the time because you're worried about getting the money to get started again. For me, the key my success and all those endorsements, it's always been the fact that I love people, I talk to people, I help people whenever I can. That's why I even do script consulting for friends and for people in the industry or people who want to be in the industry. I think it's really important to always be working with people and build relationships. The book is just all about what I learned to make the story work for me, so the people who love what I teach, I try to pass on to people because I want to help other people. I basically want to teach people never to have writer's block. Because if you can get over that, you can always be writing and working on ideas, and I like to be working on multiple things at the same time. You don't ever put all your eggs in one basket. That's another key to my success is that I don't just work on one thing at a time. I'm working on three things at a time, and when something's done and it's out there, I forget about it until I get calls about it. My agent and my managers have done their job and something's happening with it, otherwise, I'm working on three other things. Because if you put all your eggs in one basket, your relationship with everybody becomes strange because you're always calling and talking about the same project and you make it look like you only have one thing going on. If you harp on one thing, people are like, “Wow, this guy's desperate. I don't think I want to be in business with somebody who is that desperate.” Everybody in this business likes the idea of jumping on a train that is already leaving the station, with or without them. Nobody wants to sit on a train waiting for it to go for hours, days, weeks. Nobody wants to jump on a train just sitting on the tracks. Everybody's looking around and they go, “Ooh, that trains leaving the station right now and that's going to happen with or without me. That's the one I need to jump on.” And you have to be that train, you have to mentally prepare yourself and be the person who's taking off with or without them. And you have to act and perform and have the attitude of somebody with all that going on, and the way you do that is by not over investing in any one thing because anything can go at any time. You just do what you love and focus on doing what you love and trust other people to do their job and don't hammer them and call them all the time. You focus on your job, which is the writing, the acting, the directing, whatever you're doing to make your career happen, whatever part of the career you're doing in the arts.
As a writer, where do you find your inspiration to write compelling stories and interesting characters?

That’s the first chapter of my book! The first chapter is all about the premise. Now, there are a lot of different people who use premise in multiple different ways. I use a specific meaning, and for me, it's not about characters or situations; it's not a specific story because plot is a different thing. The premise of a movie or show is always about what it is you want that story to be saying to an audience, what piece of wisdom are you trying to impart or talk about that is a problem in the world today that a million people haven't said before. It's actually hard to figure out what you have originally to say that hasn't been said in movies already. When I get a project, the first thing I look for is, what's the characters, what's the story, what is the protagonist of that film or TV idea or book or whatever it is, what are they learning? What is it trying to say? What was their result? What gave them success? That's when you have a premise. What the author is trying to tell the audience and everything up until then is a fight to learn that very thing. So whether I'm creating my own story or I'm adapting somebody else's, the first thing I dig down to is what do I want to say. For me, that's the thing that keeps me from having any kind of writer's block. I can figure out what do I want to say to the world. Once you know what you want to say to the world, you can decide how you want to say it, which is picking a genre. And then from there, you're designing characters to prove and disprove, support and fight to prove that point. Because if you don't have a strong argument, not just for what you believe, but against what you believe, then all you're creating is propaganda. You have to fight hard against what you think to show them that you're thinking is better. If you don't prove it beyond a shadow of a doubt, you haven't proven anything. So you have to take the argument that is bugging you about the world, and you have to stage it and you have to stage their argument really strong so they understand that you've said something of substantial meaning. You put up a fight and you still prove what you have to say.
What advice would you give aspiring high school screenwriters?


There's so much! You know, they should take a class and find out! Until then… Your biggest asset in the industry is always going to be your relationship with other artists. It’s total cliche, but it's not what you know, it's who you know. Well, to be honest, what you know is pretty darn important, but you can't get anywhere without other people because it's a business about relationships. So when you see other people in your community and your arts community who you respect and you'd like their talents, make friends, be nice, build a relationship, do things together. You want the people who are the most creative people you know to be people you can turn to in times of success and attempted success so that you're surrounded by people who can give you feedback and you can turn to. I co-created the mentor program at the WGA because it's very hard, it's a lot of work, it's a lot of grinding your way through it. And what's going to get you through is your relationships: people helping you, people passing your work along to other people. I made the mentor program about advice so that if you're confused about how to handle a situation politically in any kind of situation, whether it's going to college, whether it's your college interviews, whether it's your classes, your relationship with your teacher, you can talk to somebody about it who is not at all in the situation with you. Because when you talk about things within the circle of the problem, all it's going to do is muddy the water and stir things up. What's important is turning to people who are not involved and not personally invested in the situation and get some feedback on how to handle it. And that's not just a lesson for writing. It's a lesson for life. Talk to people and get input on how to handle situations. You may find your natural instincts are right nine times out of ten, but that one time that your instincts weren't right, you'll be really happy to talk to somebody else and get the right way, because it can be the one that counts.
Thank you so much for your time and all the great advice, stories, and insights Michael!
5225 Wilshire Blvd Suite 222, Los Angeles, CA, 90036
www.eeicreativearts.com
Copyright © 2021
Login or sign up to start learning
Start learning
or
Sign up to !
or
click to upload avatar
I accept the Terms & Conditions
I would like to receive news, tips and tricks, and other promotional material
Start your learning journey
Sign in with your account Forgot your password?
Get a brand new password!
OK
Cancel
Get a brand new password!
OK
Cancel